Given a robot and N\times N grid, find any valid sequence of moves starting from (1,1) such that there are no more than three consecutive turns that moved the robot in the same direction and robot covers each cell at-least once.

Start at (1,1) and at each step, consider two consecutive rows and visit in pattern DRURDRU(D=Down, R=Right, U=Up). Once both rows are done, jump to another pair of rows. Take care of hurdles using some specific technique. See explanation for details.

There might be many possible solutions to the problem, lets discuss one of them. We need to derive an strategy which will be covering all of the cells using minimum number of steps and later we have to increase the steps to stop ourselves to go to forbidden cells.

Start at co-ordinate (1,1), Consider two rows at a time. visit in the pattern DRURDRU. 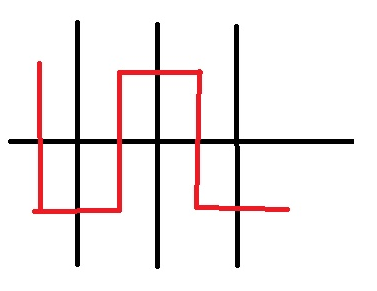 If in any row, we found a forbidden cell then it will fall in one of these two cases.

While connecting the row pair ending we will be using at most 5 steps while there is some forbidden cell, which can be shown using the following image. If there is no forbidden cell, we can do it in lesser number of steps. 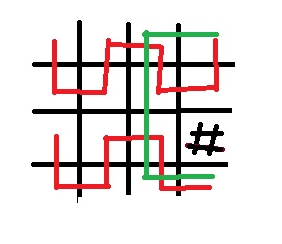 However, that “DIFFICULTY: Easy.” sounds strange after looking at scoreboard. At the same time STRAB is marked as Easy-Medium. You think this one is easier than STRAB?

Changed the difficulty to medium. The problem is definitely more difficult than the STRAB.

How is the solution handling the cases where it might not be possible to traverse the entire row. Something like

One valid solution to this would be DDRDLDRRRURDUULURULLD. Setter’s solution never returns the correct answer here.
Shouldn’t there be some basic graph based solution.

@perseus I think you didn’t read the problem statement carefully. No two forbidden cells can share a corner or side. Your test case is wrong.