Given a set S of N points in plane, you have to draw two lines such that sum of squares of distance of each point from nearest line is smallest.

The first thing one realizes about this problem is that the business of taking minimum of the distances is causing all the trouble. If we had to draw a single line to optimize sum of squares of its distance from all points, it would be a piece of cake. High school calculus can be used to find the optimum equation of the line. Here is a brief sketch:

Now imagine the optimal pair of lines. Let the lines be named A and B. Every point in our set S is closer to exactly one of A and B. Let SA be the set of points in our S closer to A than B. Similarly define SB. Note that SB = S - SA.

Cool ! So, we now have a O(N * 2N) solution, which basically iterates over all subsets SA of S, and reports the solution.

Obviously, the next step is to note that sets SA and SB cannot be arbitrary. If we are given a pair of lines A and B, then SA consists of exactly those points in S which do not lie in the colored region. Similarly, SB consists of those points which lie in the colored region. Justification is very straightforward and left to the reader. The colored region can be identified by a pair of perpendicular lines. For any two perpendicular lines L, M, let RL,M denote the the first and third quadrant of the co-ordinate system defined by line L, M. Formally, RL,M = {points P | tan ∠ PXL ≥ 0}, X being intersection point of L and M. 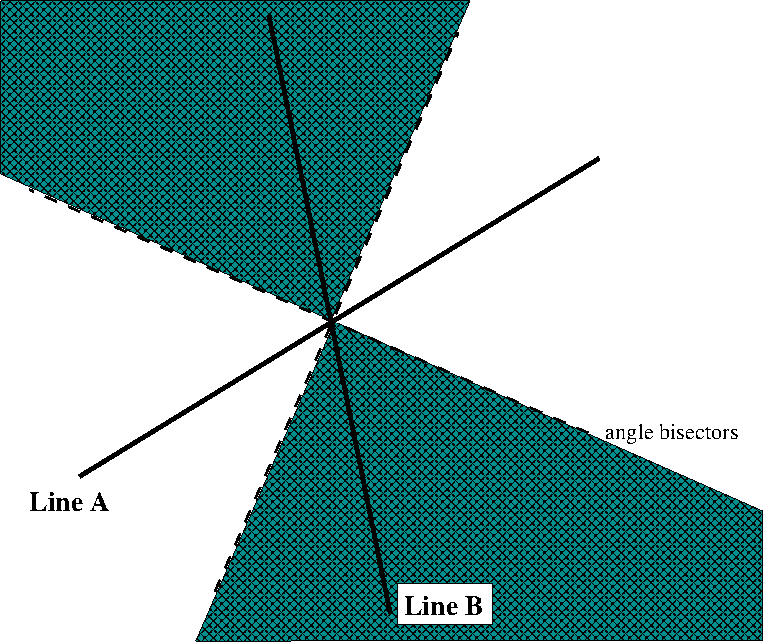 Due to discussion above, we know that the set SA cannot be arbitrary. The set SA has to be such that there exist two perpendicular lines L and M, so that SA = S ∩ RL,M.

In other words, the possible lines L and M can be infinite in number, but we can find a finite set of pairs of lines which still induce all possible partitions of the given set S. In fact we can show that the required number of pairs of lines is polynomial in N.

Now it is clear that the new lines L’, M’ obtained by above process still induce same partition of S as L, M did. Moreover, L’, M’ are completely defined by

The set Z of all possible final pairs (L’, M’) obtained after translation/rotation has size 2n3, and can be easily enumerated. We can solve the problem in O(n^3) overall time as well, because the partitions imposed by these lines can be interconverted by adding/removing single points, and hence (X, Y, XY, X2, Y2) tuple can be re-calculated in constant time. See the solutions below for exact details.

When I first read the problem, I realized I had to find regression line of N points. In this case instead of one, I had to find two. I didn’t know how to find one line, let alone two. So I googled and found an interesting paper on K-line mean : http://people.csail.mit.edu/dannyf/mscthesis.pdf

In the paper, they describe an O(n^3) algorithms for 2-line mean. They use vectors and linear algebra to solve the problem (I think!). If only I was good at linear algebra then maybe I could have understood this article (all those matrix decomposition and vector products boggled my mind). I tried studying linear algebra books for few days but they didn’t cover these advanced topics (SVD for example). Plus reading 500+ pages of a books didn’t seem efficient.

So anybody here solved the problem using this paper or linear algebra? Any resource that will help me with linear algebra (and this problem).

Hi guys, can someone help me to find the roads for those three inputs?

I noticed, that both setter’s and editorialist’s solution prints printf("%.9lf\n", ans/N); is that average instead of “minimum sadness” ?

If someone can fail this solution:
Consider all lines that is pairwise combination of given points. For each line we will consider it’s top and bottom parts. For each part we solve our known calculus thing. I got WA. Someone plz tell what test fails this approach ?

for my inputs, your solution returns

Can you describe your approach more precisely? As I understood, you split the points by line. In which part are point on that line?

Yep , u r correct. I did all possible cases. Both to bottom(1 case). Both to top(1 case). one top one bottom(2 cases). So overall 4 cases for each pair of points.

How you googled it ? I couldn’t found any good topics

look page 23, solution to our problem ))

I have given best solution for @betlista 's inputs. Now you can check where you went wrong

I’d like to ask for tips, how to solve such hard problem, respectively how to test them. First option is to create some test cases with known results. But even for those I asked here earlier, my expected result was wrong. Only idea I found is to find mean line for every triple of points, calculate distances so I will have some upper bound. I can do that for 50 points. Typically I implement some brute force solution to get answers for random test cases, but here I have no idea how to achieve this…

Another paper which solves a similar problem in O(N^3) can be found at http://infoscience.epfl.ch/record/164483/files/nscan3.PDF

@kevinsogo you are correct, negative coordinates are not valid input, but once you have working algorithm, it’s not so important, but that’s why tester’s solution “fails”…

You could at least get a O(2^n) solution as described above. That is not too hard once you give a bit of thought to the problem.

The difficult part was to get it down to O(n^3). Probably the central idea was to realize the angle bisector thing. The rest of ideas used in our solutions is fairly common. When you need to bring down an infinite number of possibilities to a small finite number in geometrical setting, this method (method described in editorial) is the way to go.

The idea of splitting point between sets SA and SB is not difficult, but I got confused because when I choose points for SA and use mean line for those, maybe some point from SB are closer to that line, but now it seems to me, that this is no problem at all…

Thanks a lot. I found bug in my calculus formula. Plus dividing by only one line will not work. It is evident for me now. It is great relief to find out where I was wrong.

I think approach to this problem is N^3logN.

Two outer loops gives us n^2. And inside it we have sorting(respect to projections to line) which is NlogN. Am I correct ?

@utkarsh_lath is that sorting necessary ?