0n the two-dimensional plane, there is a shape consisting of a square and an isosceles triangle that satisfy a few given conditions.
The conditions implied that the shape must look like this: 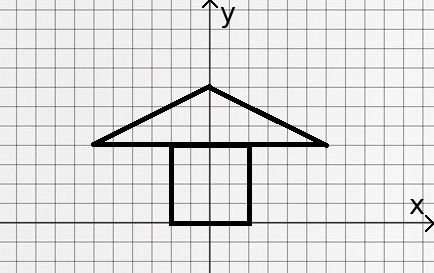 Sides of the square and the triangle could be shorter or longer but generally the shape must be similar to the one from the drawing above.
In particular, the point (0,0) is exactly in the middle of the bottom side of the square.

The problem is interactive and there is nothing given in the input initially.
We can ask queries.
In each query we choose a point with integer coordinates and the system will tell us whether the chosen point belongs to the shape (i.e. it’s inside or on the boundary) or not.
Our task is to find the total area of the shape within 100 queries.
Coordinates can be up to 1000.

Let’s assume that we have as many queries as we need.
So for each points with allowed coordinates (up to 1000), we know whether it’s outside or not.
Let’s think how to easily compute the answer (the total area), without hard geometry.
So for example, we know that following points are inside (or on the boundary) of the shape:

The described algorithm needs to iterate over some consecutive points three times.
So it would need up to 31000 queries for coordinates up to 1000.
This approach is enough to solve the first subtask, but not enough for the full score.
To improve it, we can replace iterating over points with the binary search, what reduces the number of queries to about 3log(1000) what is much smaller than 100.

In interactive problems it’s useful to write a function to ask queries.
Thanks to that, in the main part of code we don’t have to care about flushing etc.

It’s also good to extract the binary search into another function.
Let’s see a piece of code that considers the sequence of points (0,y), (1,y), …, (1000,y) and finds the last point that is inside the shape:

Likely you will need a similar function to find the y-coordinate of the highest point (the top point of the triangle).

Finally, we can combine everything into the solution:

You must remember about characters “?” and “!” before printing a query or the answer, and about flushing the output.
One more thing is that you shouldn’t choose the range of coordinates (in the binary search) to for example 1005 instead of 1000, because it can lead to asking a query about a point with coordinates greater than 1000.
Such a point must be outside the shape obviously, but you will get WA — the statement says that coordinates in queries can’t exceed 1000.
[1]: https://codechef_shared.s3.amazonaws.com/download/upload/LTIME45/RRIIK7T.png

Can we optimize the number of queries like the way we do in egg and floor problem . For example we have minimum and maximum value 1 and 1000 respectively. So we relate this to egg and floor problem then we have a maximum floor = 1000 . Then we will get optimal coordinate to check for is 44 then if it lies under it then again apply the same problem but for maximum value 44 then we will get optimal coordinate 8 and like that .

Is there any problem with this method …

Well. Once we know the side of the square A, the remaining binary searches will need about log(1000-A/2) + log(1000-A) queries. You can use this info to run the first binary search (over A) a bit better - not necessarily asking about the middle each time. I don’t see a connection to the egg and floor problem.

But there are two eggs in that problem. What does it have in common with this one?

but in this problem if the point was actually inside the shape(house) does that mean you saved your query?

@kingofnumbers - no, it doesn’t mean that

Please have a look at my

CAN ANYONE HELP ME PLZ WHY IS MY SOLUTION GETTING WA FOR ALL TEST CASES PLZ GIVE ME ONE REASON , MAY BE I AM MISSING SOMETHING IMPORTANT https://www.codechef.com/viewsolution/15483229