Given a graph G, its vertices have been numbered from 0 to 9. Some letters have also been assigned to vertices of G, as can be seen from the following picture: 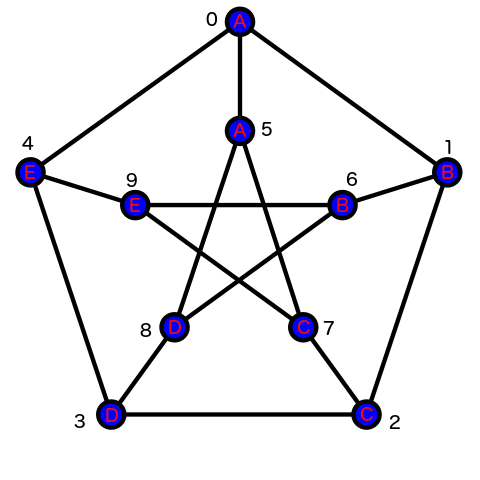 Given a string S. Your task is to determine whether there is a walk W which realizes a given string S in graph G, and if so, find the lexicographically least such walk.

Let’s consider the picture from the statement carefully. The key observation is that there’s no vertex V in G such that it’s connected with two other vertices with the same letter written on them.

In other words, if we are looking for a way to continue the current walk from a vertex V and the next letter in S is C then two options are possible:

The next observation is that there are only two possible vertices to start our walk. After that observation we are ready to compose the whole solution:

Complexity is O(N) per a testcase.

The solutions can’t be accessed.

They will be uploaded soon.

Submitted over 10 times, tried covering all corner cases, still couldn’t resolve the NZEC error, any leads? Any test cases to fail the code?

http://ideone.com/0buFbJ
(I put the code in ideone after the contest, hence not violating any rules)

My solution passed even though my code outputs “5050” for AAAA. Weak TCs?

Well secret doesn’t work (read the contest rules again) and if he made his solution private, he couldn’t link it here…

The ideone snippet was created after the contest ended, so it shouldn’t be a problem.

I have a dp solution which is not getting submitted (WA). I’ve input many test cases and it is working fine for all of them.

Since we know the letters, we just need to know whether it is taken from the inner or the outer ring.

What am I missing?

I did not understand your approach with modular arithmetic thing, for example difference AA is 5, difference AD is 3…

Your submitted code returns for

Hi during the testing I created list of basic test cases:

Solution is @Shashwat.delhi’s I just modified it such, that when line starts with ‘#’ I print this line and continue with next - it’s easier to navigate in test cases then…

I missed that “lexicographically least” part completely, but fortunately no problem…

Hi, I considered as two graphs one as outer and other as inner. There can by only one path after that we can determine after examining 1st three vertices in the string.Can someone please help me to find out where i am missing?

here is my solution link: http://www.codechef.com/viewsolution/5452717

I replaced the picture with the one from problem statement, it seems to me, that origin URL is not reachable… If it was different picture, please fix the link.

The NZEC might be due to stack overflow. Try a bottom-up approach without any recursion.

@nisargshah95:
I tried AAAA…(5000 times) to check for stack overflow on ideone, runs perfectly fine, guess that’s not it.

@kostya_by: any thoughts? Could you provide test cases used now that the contest is over?

I have checked for all corner cases…My solution passed all test cases generated by betlista… Could somebody help me where i am missing? Or provide the test cases used for evaluation?

Please tell where does my code fails…