We are given the left coordinate and the length of N horizontal lines. We have to draw another line (say L) such that the the sum of length of lines intersected by L is maximized while intersecting minimum number of lines.

This is a geometry problem which can be solved using the rotating line sweep algorithm. We iterate through all the N lines (targets) and for each end of that line we calculate and store the angle (slope) made by current line and the endpoints of the other N-1 lines (targets). And we sort these values according to the slope. Now we iterate through the values in slope order. If we encounter a slope value corresponding to the first end of some line then we add that length to our current value and on encountering the second end of some line we subtract the length of that line from our current value. We perform the same operation for all the 2 endpoints of the N given lines and calculate the maximum among all the values.

You can read about line-sweep algorithm here.

The basic idea of line-sweep is that we take a line and sweep it in the plane to encounter all the other points present in that plane. As given in the question all the targets are in a 2D plane, therefore, we can use a line to sweep across all the other points (a line segment can be represented using the two end points).

We use rotating line-sweep algorithm in this question. The basic idea is to chose a point P, draw a line passing through that point and then rotate the line about that point. The line extends in both the direction of the point, i.e., the chosen point lies somewhere in the middle of the line. And we rotate that line between angle 0 to 180 degrees and as the line extends in both direction, we cover complete 360 degrees.

Now, some of you must be wondering that there can be infinite lines passing through a fixed point, how can we check for all the lines. The solution is that we do not need to check for all the lines but only the lines formed by the fixed point and the endpoints of the other remaining lines. Once we have calculated and stored the all the angles, we sort them in increasing order. And as we iterate through all the angles, if that angle is formed by the first end of the target we add the length of that target to our currentAnswer and if the angle is formed by the second endpoint then we subtract the length of the line from our currentAnswer. Our finalAnswer if the maximum of all the currentAnswer. 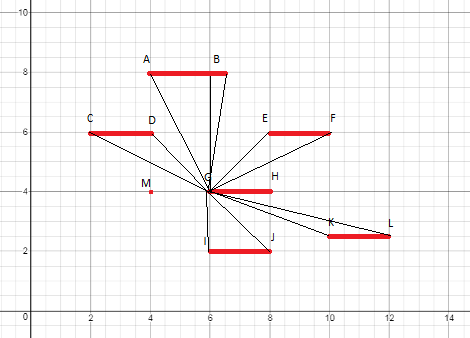 Now, let us take the above image as our example and try to visualise the algorithm. In that image AB, CD, EF, GH, IJ and KL are our targets. Let the point G be our fixed point about which we are drawing the lines. The different angles calculated are FGH, EGH, BGH and so on for the lines with y co-ordinate greater than G and for the points whose y co-ordinate is less than G, we calculate the angle MGI, MGJ, MGK and so on. After calculating all these angles we store it in some data structure and sort it based on the angles.

Once we have stored the angles and sorted it, we are ready to draw a line and rotate it about the fixed point. We start iterating through the stored angles one by one. 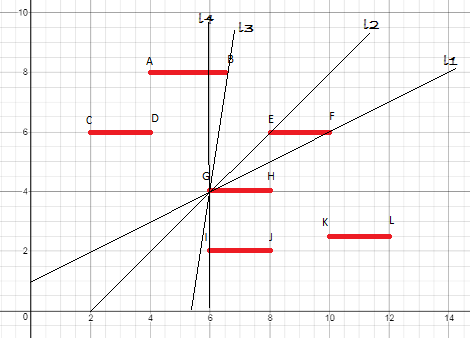 When we calculate the angle from the first endpoint of some line of length L, we push the angle, +L and +1 in the vector and when calculating from the second end point we push back angle, -L and -1 into the vector.

And in this way we calculate the answer.
The above algorithm takes O(N*log(N)) time for storing all the angles and sorting them. Now, we have to perform this same operation for both the endpoints of all the N line segments.

Author’s solution can be found here.

Feel free to give your suggestions and feedbacks, they are always welcome.

One other similar question you can try.
ADAPICK