if anyone can please explain Binary Indexed Tree algorithm because i’ve read Top Coder tutorial and didnt get it i think it was somehow hard ! if someone can give a detailed explanation . Thanks

the above two functions used for a specific problem:
You have N elements and you have to find the sum in a range say i…j as a Query

You have to update arr[x] as a update.

May this will help you If you have any Query ask me.

Correct me if i am wrong somewhere …

if i want to update from index i to j will i call the update function j-i times ?!

@blingo999: no u have to call update only two times. For sake let u have to update range i to j by adding value x. then call update two times with parameters: update(i,x) and update(j+1, -x). Go through this simple problem of BIT codechef.com/problems/SPREAD

@upendra: how to use BIT for the problems like:
There are N cards(all face up) on table we have 2 types of queries:

Can u sort out this problem?

the operation idx-=(idx&-idx) sets the last bit of the index to 0.

@jaythegenius I try to make some things clear about BIT. BIT is a kind of range tree as u know like a segment tree but it works differently.

For eg u make a query for index 5(101) so the BIT will give u the answer for ur query from 0 to 5.
Now the whole information is not stored only at index 5 in BIT but also at all those indexes which we get by one by one unsetting the set bit from it from left.

Now its complexity for a query is O(logn) coz thats the maximum set bits.

for segment updating point querying how it can be proved that update(u,v,k) = update(u,k) and update(v+1,-k) and how now query§ will give single point query ?

I think after reading above you know the difference btw BIT and segment tree but to experience it practically be free to go through the question.

1.http://www.codechef.com/problems/SPREAD
This question will surely make you understand the difference b/w BIT and segmented tree…just try to implement it using both.

2.Also read the tutorial at topcoders for BIT and to understand the lazy propogation (SEGMENTED TREES)…just tap the link shown below : 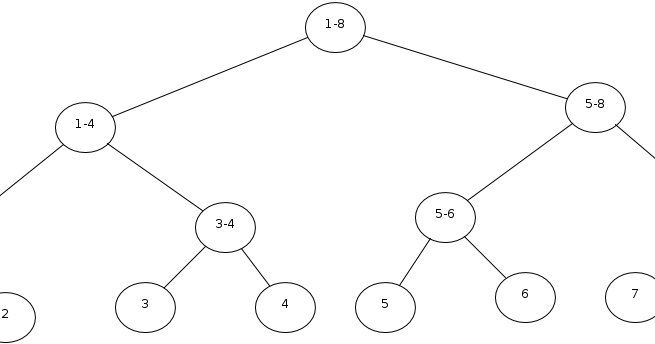 I hope now you will feel better …Happy coding…Also if you come to know about some other tricky question be frank to tell me…:)…

Can we use BIT to get sum in ranges? If yes then how?

Given a simple 1-d array, how e have to make this BIT??

@damn_me Iterate through each of the array elements and do an ‘update()’. This will construct a BIT.

this is one of the best tutorials in BIT . if u dont have any Idea of BIT , Go through it , you will easily understand the basics

this research paper has got great explanation.

Yes, you can get sum of values at index L to R inclusive.